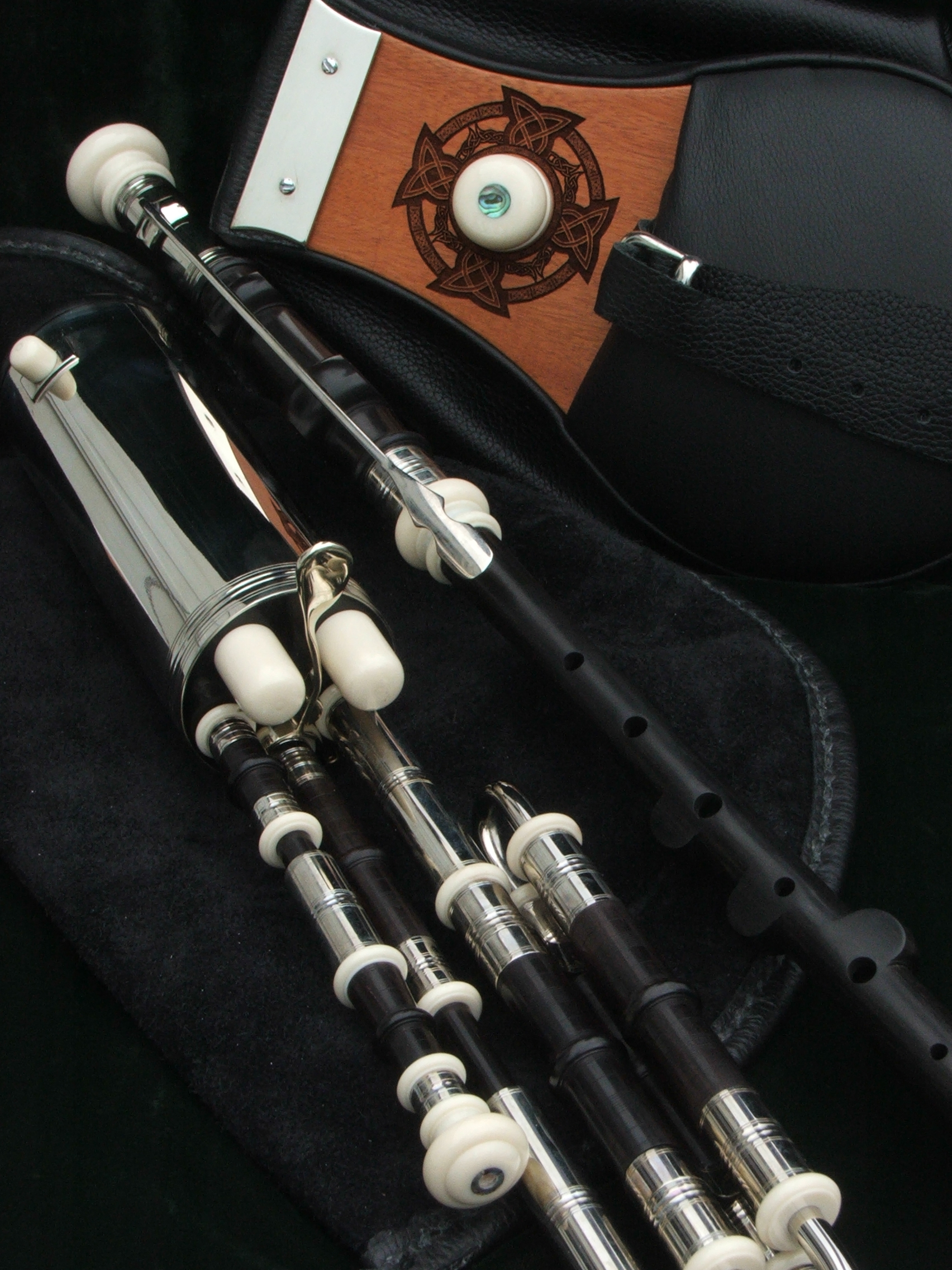 This article by Martin Nolan appeared in An Píobairí Uilleann III.2.

The Uilleann pipes is the Irish form of the bagpipes, a family of instruments with representatives throughout Europe as well as parts of Asia and Africa. It emerged in the first half of the 18th century in Ireland and Britain and was developed to its modern form in Ireland over the following 50 to 60 years. It is the most highly developed of all bagpipes, having a chanter capable of sounding two full octaves, as well as other features not found on other bagpipes.

The component parts of the Uilleann pipes are:

BAG : The presence of the bag is the feature that gives all types of bagpipe their characteristic sound. Its purpose is to provide a continuous flow of air to the instrument, facilitating the kinds of musical expression that can exploit this feature. In the Uilleann pipes the bag is usually made of leather or synthetic material. Into the bag are tied the blowpipe for the supply of air, the chanter (the melody pipe) and a stock into which the other components (drones and regulators) are inserted.

BELLOWS : Generally speaking, in the more recently developed forms of bagpipe the air is supplied to the bag by means of a bellows rather than through a mouth-blown blowpipe. The Uilleann pipes shares this feature. Apart from relieving the player of the necessity to blow into the bag, the presence of the bellows has another important effect. The fact that the instrument is supplied with dry air from a bellows rather than moist air from the player’s mouth, means that the reed can be modified. Not having to withstand the effects of moisture the cane can be pared thinner and a more mellow, wider response can be obtained. Where the (mouth-blown) Highland pipes have a range of only 9 notes, the Uilleann pipes can normally sound two full octaves, and it has been demonstrated that all the notes of a third octave can be obtained.

CHANTER : The chanter is the part of the instrument upon which the melody is played. It is a woodwind instrument, the sound source being a double reed made of cane or (sometimes) synthetic material. Among orchestral instruments the oboe is the closest to it in design and sound. It has a conical bore and ten note holes; the highest one at the back of the instrument is closed by the thumb. It is open at the bottom, and the note sounded with the bottom open and all the finger holes closed is the keynote of the instrument. Without additional keyed sound-holes two keys can be sounded without difficulty, one of them by using cross-fingering for a single note. By convention these keys are referred to as D and G regardless of the actual pitch of the instrument. It is normal to add at least one keyed sound-hole to a chanter to achieve the note of C natural in the upper octave. An F natural key is the second most often used accidental and keyed sound-holes are often provided for this note as well. Fully keyed chanters that are completely chromatic are found, as well as examples with varying lesser degrees of complexity. Traditional music can mostly by played with just two additional notes. The Uilleann pipes chanter is open at the bottom, but can be closed in normal play by being placed on the player’s knee. This feature enables the Uilleann piper to use two sets of musical possibilities that are not simultaneously available on other forms of bagpipe. Players of permanently open chanters (e.g. the Highland pipes chanter) employ a suite of ornaments to embellish the necessarily sustained notes. On the other hand, players of permanently closed chanters (e.g. the Northumbrian Smallpipes) can opt for a totally staccato style, giving a completely different character to the music. Players of the Uilleann pipes have a chanter that can be open (held off the knee) or closed (placed on the knee), allowing them to play in either style, or in a mixed style, availing of the advantages of both.

DRONES : The drones are pipes that are tuneable and are designed to provide continuous single-note accompaniment to the chanter. They can be switched on or off by means of a stop-key, and are tuned by means of sliding components. On the standard modern set there are three drones, tuned to the bottom note of the chanter and the notes an octave and two octaves below that. The drones are set into a common stock (which is tied into the bag), and they like across the player’s lap.

REGULATORS : The regulators are similar to the chanter in design, having several note-holes. However these are closed by sprung keys, and the regulators are sealed at the bottom. In the standard set there are three regulators and they are set into the same stock as the drones and lie across the player’s lap above the drones. They are so arranged that a chord can be sounded by pressing three adjacent keys. The different regulators have four or five keyed note-holes, so five basic chords are easily accessible the player. When playing dance music these can be obtained by using the side of the lower hand on the chanter, and they are used to provide rhythmic and simple harmonic accompaniment. In slower music or when the lower hand is free, more complex chords can be sounded. Although other forms of bagpipe have analogous components, the configuration and functionality found on the Uilleann pipes is unique.