The History of Irish Uilleann Pipes

This article by Martin Nolan appeared in An Píobairí Uilleann III.2.

The first reference to the bagpipes in Ireland is found in a dinnseanchas or topographical poem, “Aonach Carman”, the fair of Carman, a composition of the eleventh century found in the Book of Leinster:

It is obvious that the player of the pípaí here mentioned differed from the cuisleannaig or pipe blowers; and since pípaí, modern píopaí, was found some centuries later to designate the bagpipes, it is reasonable to assume that in its earliest recorded occurrence in Irish the term likewise related to this instrument.

Woodstock piperThe earliest representations of pipe-playing are to be seen on the High Crosses, and illustrations are next recorded in the 16th century. A rough wood carving of a piper formerly at Woodstock Castle, co. Kilkenny, and the picture of a youth playing the pipes drawn Rosgall piperon the margin of a missal which had belonged to the Abbey of Rosgall, co. Kildare, belong to this century. The two pipes depicted are obviously the prototype of the present day Píob Mhór or war pipes. In form they are one with the types depicted on the Continent about this time (e.g. Dürer’s piper, 1514).

There is no record of the pipes or any other musical instrument being played on the field of battle in pre-Norman Ireland. In later times the pipes were regarded by foreign commentators as being peculiarly the martial instrument of the Irish.

Dürer’s piper“To its sound this unconquered, fierce and warlike people march their armies and encourage each other to deeds of valour”.

The pipes had a more peaceful use. Writing in 1698, John Dunton, an English traveller, describes a wedding in Kildare:

“After the matrimonial ceremony was over we had a bagpiper and blind harper that dinned us with their music, to which there was perpetual dancing.”

The distinctively Irish type of pipe emerged about the beginning of the 18th century. Its distinguishing features are:

The modern full set of pipes comprises bag, bellows and chanter, drones and regulators. The tenor or small regulator was added to the set in the last quarter of the 18th century. It was spoken of as a recent addition, not yet in general use, in 1790 and it was the only one referred to by O’Farrell in his tutor for this instrument which was published about 1800. The middle and bass regulators were added in the first quarter of the 19th century.

These pipes are now most commonly known as Uilleann pipes (pronounced ill-yin, from Irish uille, elbow). This name was first applied to the instrument as last as the beginning of the 20th century when it was foisted on the public in 1903 by Grattan Flood who then proceeded to equate it with the ‘woollen’ pipes of Shakespeare, thus providing for the instrument a spurious origin in the 16th century.

Pipes are made in various pitches. In the older sets the pitch is usually a tone, sometimes more, below concert pitch. Among players such pipes are known as ‘flat sets’. The bottom or fundamental note of the chanter is called ‘D’, irrespective of the pitch. This custom of calling the bottom note of their instrument ‘D’, irrespective of the actual pitch, is also common among flute and whistle players.

Piping was at its zenith in pre-Famine Ireland. Thereafter the old dances began to give way to the various sets and half-sets based on the quadrilles and the pipes were superseded by the melodeon and concertina. Towards the end of the 19th century it seemed as if the Irish pipes were fated to follow the Irish harp into oblivion. Fortunately, when the national revival, initiated by the Gaelic League, got under way in 1893, all aspects of the native culture began once more to be cultivated. Pipers’ clubs were founded in Cork (1898) and in Dublin (1900).

Competitions for the instrument were organised by the newly founded Feis Ceoil and the Oireachtas and the old surviving pipers were assisted to attend and compete at these events. Genuine traditional players were engaged to teach beginners and in this way the art of piping was passed to a new generation without any break in tradition. While the succession was secured, the pipers’ clubs did not long survive the first flush of enthusiasm and once more the future of the instrument was in jeopardy. Occasional surges of interest occurred but public reaction to the music was one of disdain and the difficulty of obtaining pipes in tune and easily sounded disheartened youngsters attracted to the instrument.

The establishment in 1968 of Na Píobairí Uilleann, the Uilleann Pipers, may well prove to be the factor which will ensure the survival of the pipes in Ireland. Founded by musicians who had ties with the first pipers’ club in Dublin and restricted to practitioners, this society possesses firm links with the past, and these are further strengthened by the discovery of old cylinder recordings (made in the first decade of the 20th century) of pipers who were then old men. Live tuition and the study of those old recordings have resulted in a line of young players whose progress towards a master of the instrument continues to astound the older players. The rediscovery of the pipes, at an international level, is reflected in the number of aspiring pipers from America and Continental Europe who visit Ireland each year to learn the instrument. The progress made by some of these visitors is astounding.

The surge of interest in piping has generated other activities. Numerous records of piping have been issued by recording companies; specialist collections of the dance music have been published as well as a tutor for the instrument and a manual of pipemaking. Active membership of Na Píobairí Uilleann now exceeds 280 and is spread throughout Ireland, England, Scotland, Continental Europe, North America and Australia. The most heartening aspect of all this activity is that it is rooted firmly in tradition. In the present exhibition it is primarily the uilleann or union pipes which are on display. This is the distinctively Irish form of bagpipe and undoubtedly the sweetest and most complicated member of that family. These pipes developed around the beginning of the 18th century from the older mouth-blown type, the history of which is here depicted in prints of carvings and pictures from contemporary sources. Earliest surviving sets of uilleann pipes date from the second half of the 18th century but it must be said that datings are not definitive. Only recently has scientific attention begun to be paid to the instrument and problems relating to various stages of its development have yet to be resolved. The sets on display from the Museum’s collection cover broadly the period 1770-1870. Noteworthy are the ivory set from the late 18th century and the two-drone set from the early 19th century, attributed to Egan, father of the famous Dublin harp-maker. Pipemaking appears to have reached the zenith of its development around the second quarter of the 19th century, a period represented in the exhibition by sets from Kenna, the Moloney brothers and Coyne. All are distinguished by a very high degree of craftsmanship. Exhibits from present-day makers underline the renaissance of piping which has occurred during the last ten of fifteen years. Since pipe music has remained largely unaltered over the past two centuries, modern sets show no radical divergence fro the older makes. Changes are to be observed, however, in methods of working and in the materials used. 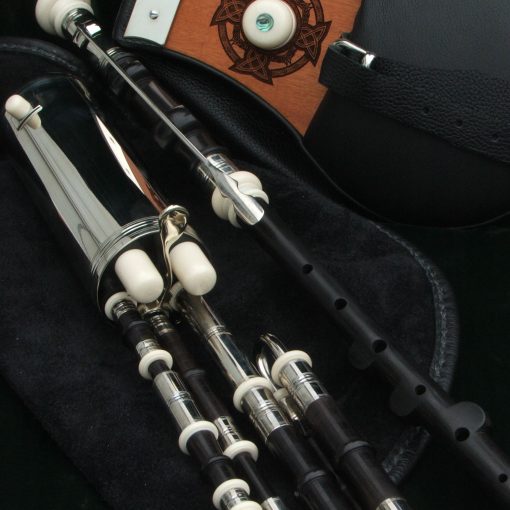