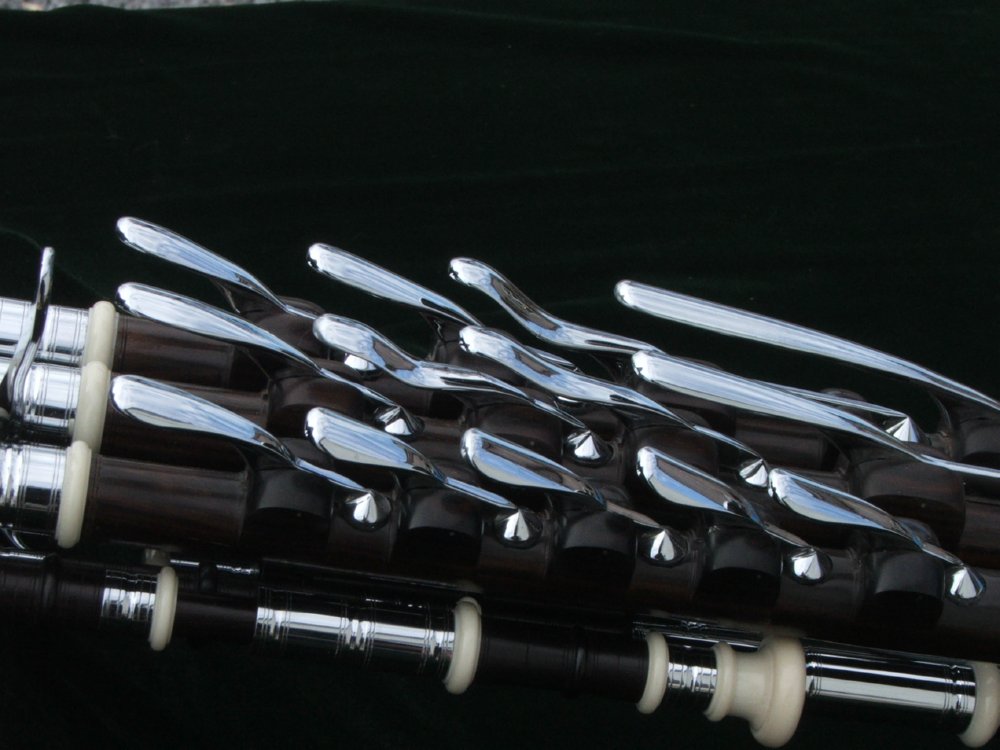 Materials that you will need:

1) First of all, mark the top of the sax/clarinet reed with a pencil so that you will know which is the upper surface of the reed. Once the reed has been cut it is very difficult to differentiate top from bottom. (See below)

2) Using a Stanley knife blade and hammer Chop off a length of cane from the bottom tapered portion of the Sax’ reed which is as long as the reed body, as indicated in the diagram. Keep the discarded thick end section for making the Bass tongues.

3) Using the Stanley blade cut off a strip for the tongue the width of the reed body. You will only need to apply finger pressure to make the cut, or employ a light blow with the hammer. MIND YOUR FINGERS! 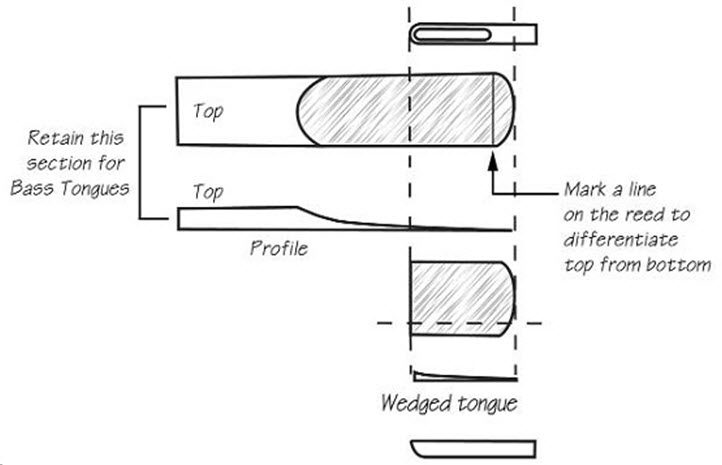 4) If you have cut the strip of cane too wide then carefully turn it on its edge and rub it gently on the abrasive paper until it is the correct width. Don’t forget which is the ‘top’ side and underside of the tongue!

5) Carefully trim off the thickness of the wedge so that the tongue is really quite thin along its length, almost uniform in thickness from the thinnest end, at the most a thin wedge shape in profile. If the cane is too thick not only will it give a dull tone but it will probably also be too low in pitch. Trimming it nice and thin gives it a lovely bright tone and will produce the correct pitch. Practice and experience will inform you of the best thickness but try starting with a wedge no more than 1.5 – 2mm thickness at the thickest end. Always remember that you are working on the ‘top’ side of the cane.

6) Putting a curl in the bottom of the tongue (the thinnest part) will help raise the correct ‘pressure gap’. The more pronounced the curl the larger the gap will be and the stronger the reed will be. Practice will soon inform you of the appropriate curl to put in the reed. It only takes enough to raise the end of the tongue about 1 mm. To put a curl in the bottom of your reed tongue, simply take a hard rod which is approximately 3-4mm in diameter (diagram below). I use a woodworkers’ Bradawl but something like a thin knitting needle will do. At a point 3-4mm in from the end of the thinnest part of the tongue (the bottom) press the curved surface of your chosen tool firmly into the reed. Whilst maintaining a firm pressure move the tool from left to right and right to left until you can see the end beginning to curl. You will only be rubbing an area of cane no more than about 3-4mm in length. Usually one firm movement will do the job.

Take a length of thread sufficient for the job.

a) Hold the tongue in position on the reed body with your thumb and forefinger, gripping the reed by the sides. Make sure that the ‘top’ surface of the reed tongue is uppermost. If you tie the tongue on upside down you will not get a good seal and the reed will not work.

b) Check that the tongue is neither projecting too far forward of the end of the reed body, nor that it is too far back, thereby causing air leaks (see diagram below). If the bottom of the tongue is in its correct position for tying on then any excess projecting over the top end can be trimmed off.

c) Start winding the thread on from the very end of the reed body until it contacts the cane tongue. You can now move your fingers further towards the front of the reed whilst you bind on the rest of the thread.

d) Once you have contacted the tongue you must wrap the rest of the hemp on very tightly up to about five turns above point ‘A’ (see diagram below). The tightness of the wrapping combined with the ‘curl’ should raise a gap of about 1 – 1.5 mm at the end of the reed. 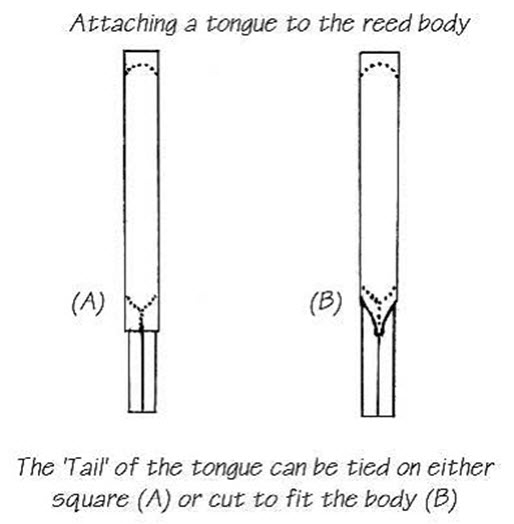 e) Place the end of the reed in your mouth and suck. If you have both an airtight seal and you can obtain a constant note without clapping while sucking through the reed, try it in the drone. 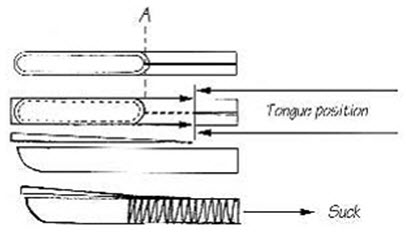 f) If when you try the reed in the drone it simply claps shut, you must raise a wider pressure gap at the end by either flicking the tongue as indicated earlier, tying on one or two more turns of hemp very tightly, or stripping the hemp off and putting a more pronounced curl in the end of the tongue. If you tie the hemp too high up the reed it will more than likely just produce a squeal. If this should happen, withdraw some of the hemp. You will find out through experience the optimum position for the hemp on the tongue.

Be careful not to misalign the tongue whilst pushing the reed into its socket, as the tendency is to twist the reed while doiong this and you can unwittingly twist the tongue out of alignment thereby causing problems.

Once you have produced a nice steady note, and the tuning slide is in a reasonable position, i.e. neither hanging off the end of the drone, nor pushed too tightly towards the top, you may consider yourself as having produced a good reed. Congratulations! From now on you need not fear when a reed goes wrong, just re-tongue it.

To re-align a tongue:

With the reed seated in the drone socket hold the end of the offending reed (tongue and body) between thumb and forefinger where the hemp finishes (the ‘root’) Now, gently, twist the reed in its socket in the direction in which the tongue has to move(see diagram below). Be careful not to go too far in the other direction. Too much messing around could wreck the reed. 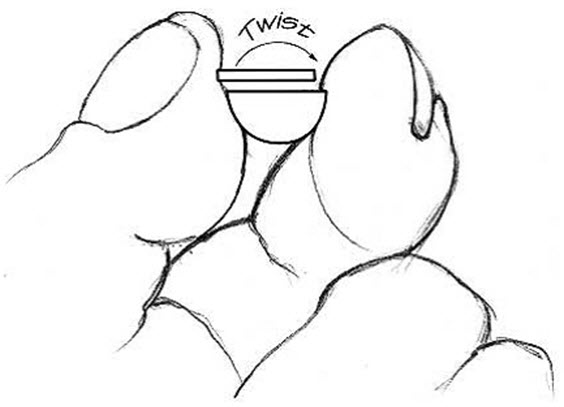 Exactly the same procedures apply for making a bass drone reed as those described above for tenor and baritone reed tongues. However, because of the longer length of tongue required you will have to cut this from the longer and thicker section of your bass sax/clarinet reed which was left after you cut off the section to make your tenor tongues. Use a sharp Stanley knife blade and hammer to cut off your tongue section. One Bass Clarinet /Sax’ reed will make three Bass drone reeds and four tenor or baritone reeds. A Contra Bass Clarinet reed is good for Bass reeds as they are longer.

If using the remnants of a Sax’ reed: The section of cane that you cut off for the bass tongue will be almost uniformly thick along its’ entire length. You will therefore have more work to do in trimming this down than you had to do for the smaller and thinner tenor/baritone reeds.

Having cut the remaining piece of cane longitudinally into three pieces, you should first of all slice the chosen piece right through the middle of its thickness, across its entire length (diagram below). The thickness should now be 2-3mm and no more. Your next task is to carefully trim off the cane from your tongue so that you produce a wedge shaped profile. (See diagram.) The thickness of the tongue at the thinnest end should be paper thin. The thickest end should be about 2mm thick. In other words you are producing a wedge from about 2mm at its thickest end tapering down to approximately 0.25mm at its thinnest. 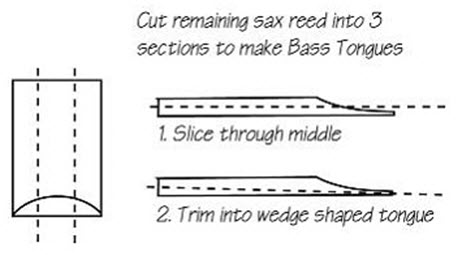 At this point you can either put in a curl at the thinnest end, as with the other reeds, or you can try simply tying the tongue on very tightly. Bass reed tongues respond more readily to the tightness of the wrapping than do the smaller reeds and so you may find this sufficient to raise the appropriate pressure gap.