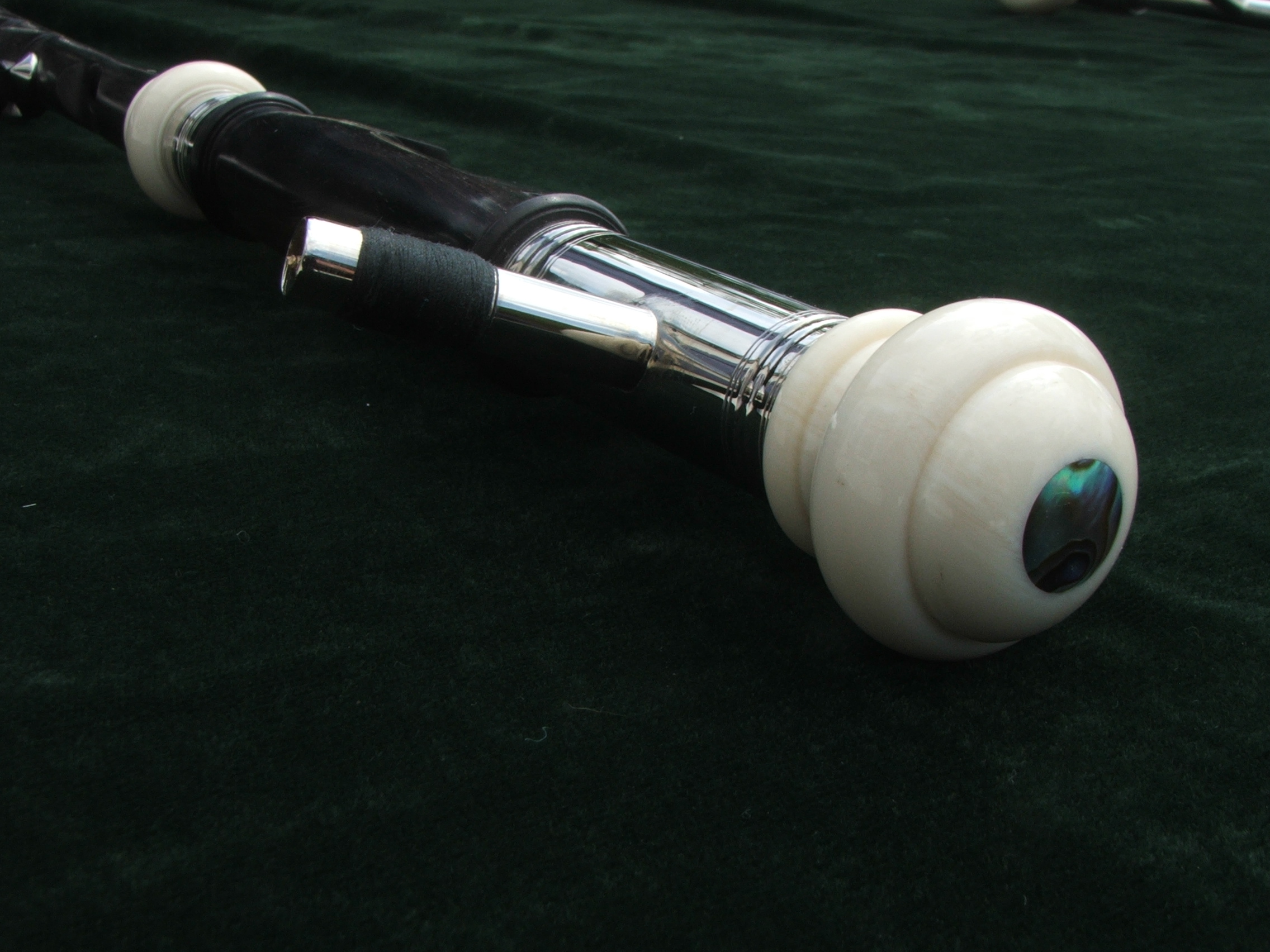 There are generally only five problems that commonly arise. 1. ‘Clapping’, i.e. the reed closes shut with the result that there is no sound 2. Poor tone, funny noises or double toning. 3. Squealing as pressure is brought to bear on the reed. 4. No sound but a lot of air. 5. Tuning problems i.e. reed too sharp or flat.

If the gap between the reed tongue and body is too little, then as you bring pressure to bear upon the reeds the air pressure will hold the tongue closed against the reed body with the result that there is no sound. In order to function the tongue needs to spring back open against the air pressure, i.e. it needs to vibrate. To remedy ‘clapping’ you must adjust this pressure gap until the reed is responding to your playing pressure with the production of a nice clear note. If the playing pressure required to work the reed is too great for your comfort then reducing this pressure gap will produce a lighter reed that will respond to a lower pressure – but one that might also clap shut. The art is to make all reeds play at the same pressure, and one that you are comfortable with. This is what we mean when we say that the drone and Chanter reeds should be ‘well balanced’. As well as being balanced in terms of the playing pressure well balanced reeds should also complement each other in terms of tone and volume.

To remedy a ‘clapping’ reed, employ one of the following methods to either increase or decrease the pressure gap.

a) Gently flick the tongue away from the reed body a couple of times and then re-try the reed in the drone. You must exercise extreme caution when doing this as you could break the tongue at the root if you flick too hard. You will help prevent this if you support the tongue by placing a finger on top of the tongue at the point where the hemp/thread wrapping finishes. If after you have done this the reed still claps, then try a couple of more flicks. This will work if you do it properly. Try this first without removing the reed from the drone socket (see diagram below).

b) Remove the reed from its socket in the drone and then remove three or four turns of thread from the ‘root’ end of the reed, re-wrap very tightly. The tightness of the wrapping affects the gap i.e. the tongue should rise away from the body relative to the tightness of the wrapping. If tighter wrapping does not raise the tongue then flicking should be pursued. Simply pushing the thread down with your fingernail the distance of one or two thicknesses of thread may also do the trick. You will be surprised at how much the movement of the thread by one or two thicknesses can alter pitch and pressure, especially with the Tenor reeds.

To reduce a pressure gap simply pull the hemp back off the tongue by three or four turns and then wrap it back on lightly whilst observing the gap – it should decrease. This will also have the effect of raising the pitch of the reed. If the gap does not reduce sufficiently then you will have to take more wrapping off than before and try again until you have reduced the gap adequately. (See instructions for re-tonguing and tuning.)

Note. When wrapping thread onto a reed tongue you must be very careful not to misalign the tongue on the body. (See instructions for re-tonguing and tuning. Also see “re-aligning a reed tongue”)

If none of these methods remedies the problem the easiest thing to do is to replace the tongue with a new one. (See instructions for re-tonguing and tuning.

The first thing is to suspect an air leak somewhere in the drone system. Areas to check are: –

a) Check that the reed is seated in the drone socket securely (see diagram below). To check this; remove the reed from the drone, and then hold down the tongue against the reed body and suck through the tubular end of the reed. There should be no significant amount of air drawn into the mouth when the tongue is correctly seated. When sucking you should be able to remove your finger from the end of the reed whilst the tongue continues to form an airtight seal. If the tongue does not hold its seal, or if you can hear air, then the tongue may have to be re-aligned, or replaced.

See re-aligning a reed tongue/re-tonguing and tuning. Also check for any foreign particles lodged between the tongue and the reed body.

b) Check that the tongue forms an airtight seal with the reed body. Draw the tuning slide off the tuning pin and then carefully remove the drone ‘standing part’ from the drone stock. Place your mouth over the open end of the tuning pin. Leaving the reed in the drone socket, hold down the tongue as above, and again try to draw air. No appreciable amount of air should pass through the reed/drone and none at all should be coming through the drone via the reed socket. If there is, remove the reed and wrap a few turns of hemp around the base of the reed to create an airtight seal, re-seat and test again. If necessary apply a sealer such as wax or similar to the end of the reed socket covering the area where the reed enters the drone. Please be sure not to suck any foreign bodies into your lungs !

c) When replacing drones into the drone stock always check that the reed is not skewed in its socket so that it cannot hit the wall of the drone socket, which can cause problems. This ensures that the tongues can vibrate freely without obstruction. If the reed is skewed, the tongues may well hit against the wall of the socket and thus produce either a poor tone/noise, or may even not beat at all.

d) Check that the tuning slide is not too loose over the tuning pin, as this can also create air leakage and problems. In this case wrap a few turns of thread over the threaded end of the tuning pin to tighten up the sliding ‘action’. This ‘action’ should make the slider easy enough to move with one hand whilst not being so loose that it might move of its own accord whilst playing. Nor should it be so tight that when you attempt to move the slider up and down the tuning pin the standing part moves or pulls out of the drone stock. If the standing part moves in the drone stock whilst you are attempting to tune the drone, but the action of the slider is comfortable, you will have to tighten up the standing part in the stock by the same method of employing thread as above.

If all of these areas are satisfactory and you still have ‘poor tone and or funny noises’ try pulling the thread back off the tongue by three or four turns and re-wrapping, as in instructions for ‘clapping’. If all else fails, re-tongue.

Reeds can at times develop a squeal as air begins to pass over the reed when you begin playing. If this happens then usually a quick stroke of the fingertip over the end of the offending drone will cause it to pull itself together. If the problem continues then suspect and check the following:

a) That the system is airtight.

c) That the pressure gap is not too great.

a) Try pulling two or three turns of wrapping off the tongue and re-try.

b) Flicking the tongue as per instructions under ‘Clapping’.

c) With a scalpel, razor blade or sharp knife gently scrape some ‘dust’ off the root of the tongue, this will usually work – it will also reduce pitch and playing pressure. You only need scrape a tiny amount of dust off here to have an effect! (See following diagram) 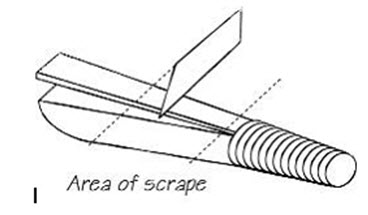 The position of the tuning slide on the pin only becomes a problem if: –

If the drone reed has gone too sharp you will find that you have to pull the tuning slide to a position where it may be uncomfortably close to the end of the tuning pin (the threaded section ) and in danger of falling off. The other possible consequence is that the performance of the reed may be affected. My drones are usually set at a point just above the threaded area of the tuning pin.

If the drone reed has gone too flat you will find that you are having to push the tuning slide so far up the tuning pin that it is still tuning flat when it has no more room to travel, i.e. there is no more tuning pin visible. You should always have room for tuning adjustments on your drones.

If you cannot remedy a tuning problem and the reed becomes fatigued by an excess of adjustment and it will not behave normally, then always re-tongue.